We carry a wide range of fire suppression systems, catering for a multitude of applications.

FM-200® is the clear choice for a fast, clean fire protection agent. Introduced as a Halon replacement in 1993, it quickly gained acceptance as the world’s leading clean gaseous fire extinguishing agent. When it comes to fire protection, there can be no compromise.

FM-200® extinguishes fire via a combination of chemically based fire inhibition and cooling. It is environmentally acceptable, safe to use with sensitive equipment, fast-acting, efficient and effective.

FM-200® fire suppression systems work hand-in-hand with state-of-the-art control and detection components to identify and extinguish fires, long before substantial fire damage can occur. Without changing your current control panel or detection systems, an existing system can be easily converted to FM-200®.

When it comes to fire protection there can be no compromise – contact us to day to learn more about our FM-200 system solutions. 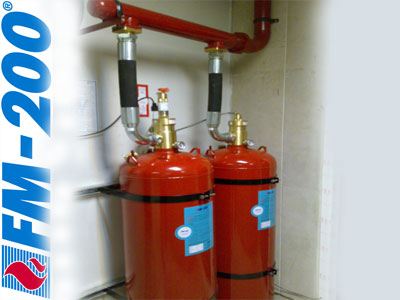 INERGEN® is a mixture of nitrogen, argon and carbon dioxide gases and has been specially developed to provide fire protection as a Halon 1301 replacement. INERGEN® extinguishes fire by reducing the oxygen level in a room to below 15%, the point at which most combustibles will no longer burn. Simultaneously the carbon dioxide in INERGEN® stimulates the uptake of oxygen by the human body, so protecting anyone who might be trapped in the fire area from the effects of the lowered oxygen levels.

Fully tested on humans
INERGEN® has been medically evaluated and approved by leading authorities around the world. All of them have accepted INERGEN® as being safe for use in “normally occupied areas”. INERGEN® is the first Halon replacement to have been fully tested on humans.

With thousands of people having been exposed to INERGEN® with no ill-effect during test discharges, it has an excellent track record of safety in operation.

Escape routes are not obscured.
INERGEN® is stored in gaseous form. It therefore does not produce fog when the gas is released into the room.

Excellent retention time within the room.
One of the greatest failings of Halon systems is the speed with which the Halon gas escapes from the room after discharge. The mixture specification of INERGEN® overcomes this problem by bringing the relative density of INERGEN® close to that of air. The result is outstanding hold time performance for INERGEN®.

Proven Fire Fighting performance
INERGEN® has an impressive track record of fire fighting around the world with millions of pounds worth of equipment and production saved by the fast acting capability of INERGEN®. 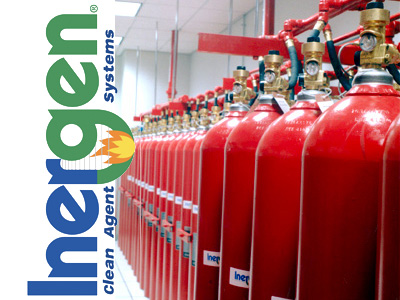 The search for halon 1301 replacements has been on-going for over 10 years and each alternative brings with it a unique set of properties. We have brought to the market products that match the requirements of industry and our latest research allows us to introduce fire protection systems using Novec 1230 fluid, a new development with some advantages over current technologies. Novec 1230 fluid allows us to complement our existing range of agents as the phase out of halons accelerates in many countries around the world.

Novec 1230 fluid is known as a fluorinated ketone and is manufactured by 3M.

Novec 1230 fluid has low toxicity and has a boiling point of 49 degrees C and therefore exists as a liquid at room temperature. Like halon 1301 it is super-pressurised with nitrogen to 25 bar. Like most other chemical agents, it rapidly extinguishes through a combination of heat absorption (its main action) and some chemical interference with the flame.

Novec1230 fluid contains neither bromine nor chlorine and has zero 0zone depleting potential.

The atmospheric lifetime of Novec 1230 fluid is estimated to be in the range of 3-5 days and with a global warming potential of 1, it is considered that the Novec 1230 fluid has no measurable impact on climate change. These attributes ensure that Novec 1230 fluid represents a truly sustainable technology.

Acute toxicity testing has shown that Novec 1230 fluid is safe at end use concentrations. The effective toxicity exposure limit is greater than 10% for both the acute inhalation exposure and cardiac sensitisation No Observed Adverse Effect Level (NOAEL) and set against low design concentrations, it offers margins of safety (up to 100%).

Despite having a low boiling point, Novec 1230 fluid is able to be effectively vapourised over a wide range of hazard temperatures. It is therefore available to protect most hazards traditionally protected with halon 1301 and will be particularly important in Marine applications and others where high margins of safety and long term sustainability are considered to be important features.

One of the advantages offered by Novec 1230 fluid’s high boiling point is that it presents very low vapour pressures, enabling it to be transported in lightweight totes or drums as opposed to steel pressurised containers. This allows Novec 1230 fluid to be readily air freighted and as both initial filling and recharging operations are possible by simply pouring the fluid into containers, prior to super-pressurising, the filling operation is far simpler than with traditional high pressure gases.